No matter what time of year, I’m sitting here dreaming of the next time I get to cast my reel. If you’re anything like me, you’re already planning your next trip, Googling ‘how to catch big fish,’ and ordering every last bit of bait and equipment you’ll need to be better next summer than you were the last. 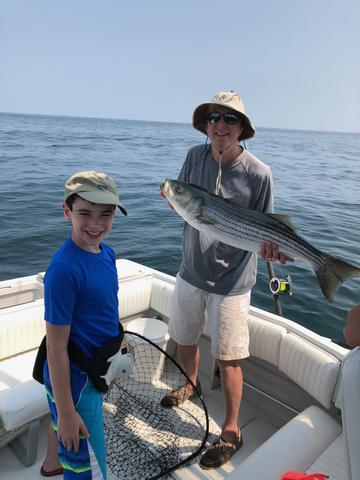 SO, YOU WANT TO KNOW HOW TO CATCH BIG FISH

One of the first questions I’m asked when people find out how much I like fishing is how to catch big fish. Hey, everyone enjoys some friendly competition.

Do you have the right bait for that particular fish?

How about that hook? Will it allow you to reel in the same sized fish you have in mind?

If you’ve answered ‘no,’ ‘no,’ and ‘no’, back to the drawing board it goes. Don’t waste a good day out on the water, just hoping and wishing for any old big fish to come along!

HOW TO CATCH BIG FISH IN THE OCEAN 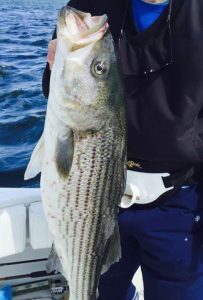 For over fifty years I’ve been fishing the waters of Cape Cod, and the Islands. It never gets old.

Whether it’s chasing large stripers from the shore or a boat, battling the toothy bluefish, or just catching a mess of delicious scup for the table, there’s a right way and wrong way to do it.

The striped bass is the most sought after game fish all along the U.S. east coast. It’s a fish that fights very hard when hooked, can grow to over seventy pounds, and is delicious on the dinner table.

The striped bass will hit a variety of artificial lures, live bait, and cut bait. It’s found in the surf, offshore, and even in tidal rivers.

My favorite way of catching large striped bass is by using live bait from a boat, which is easily found along the eastern U.S. coast. Mackerel and sea herring are abundant and can be caught in large numbers quickly by the use of Sabiki rigs and other types of multiple hook rigs specially designed to catch live bait. Most boats designed for fishing offer a live well that draws in and circulates raw seawater. If squid are available, they too can be caught and live-lined for striped bass.

Striped bass can also be caught by trolling from a boat, fishing with cut bait, or surfcasting lures or bait from an ocean beach. Even the lowly sea worm makes a great striped bass bait.

In Massachusetts, the rules for catching and keeping striped bass are strictly enforced. Any fisherman is allowed only one “keepah” per day (Massachusetts slang for a fish over 28 inches, but under 36 inches long). All others, whether larger or smaller, must be released unharmed. In recent years the use of circle hooks has made the release of striped bass and other fish easy. Circle hooks tend to catch the fish in the lip or jaw where it can be released unharmed to grow up big and, who knows, maybe become a trophy fish for some lucky fisherman?

The season for Striped bass is all year long. Depending on where you live on the East Coast, the optimum season varies with the arrival of warmer weather. In New England, the striped bass season generally gets under way at the beginning of May, with the prime months being June, July, September, and October. Further down the East Coast, the season gets under way earlier and ends later.

Once you catch your first “keepah” you’ll be hooked.  It’s been over fifty years and the thrill for me is still the same.