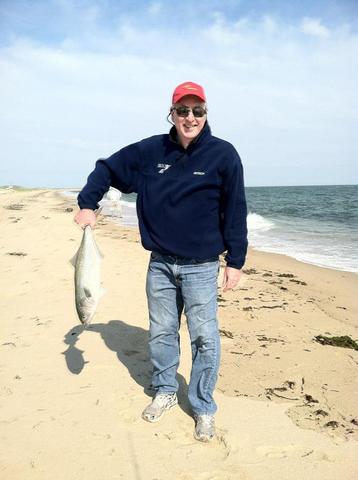 It’s been said that a bluefish is sort of like a salmon, except a salmon that needs to be in anger management.

I’ve been catching bluefish for fifty years. Pound for pound, the bluefish is one of the hardest fighting fish in the sea. Sometimes reaching a length of over three feet and weighing upwards of 20 pounds, it’s a fish that has a fearsome reputation for decimating large schools of baitfish.

The fish is very streamlined and has a row of razor sharp teeth on the top and bottom. Many a careless fisherman has ended up in the local hospital emergency room after carelessly handling a hooked bluefish. The bluefish has the characteristic of being able to see perfectly out of water.

Bluefish oftentimes travel in large schools. Bluefish can be caught on cut bait, live bait, and a wide variety of lures. All work fine. They can be caught by trolling, or still fishing from a boat. The bluefish is also commonly caught by surfcasting from a beach or tidal estuary.

Once hooked, the fun begins. The fish fights much harder than other fish of a comparable size. The bluefish is acrobatic. Several leaps out of the water are typical before a hooked fish is landed.

Because of the razor-like teeth, a short wire leader between the line and the lure or hook is recommended. Grabbing the wire leader when landing a bluefish will protect the fisherman and make handling a hooked bluefish easier. A five pound bluefish can easily sever a finger!

If you’re not keeping the fish for the table, it should be unhooked and quickly returned to the water. Bluefish are hardy and can survive a long battle only to fight again another day. If the fish is destined for the dinner table it should be bled, filleted, and iced immediately. Fresh bluefish is considered to be a delicacy by many. The smaller specimens tend to be less oily and better as table fare than a really large bluefish.

Bluefish are worldwide in distribution. Along the east coast of the United States they range from Nova Scotia to Florida. The bluefish migrates in large schools and usually shows up in New England waters around the beginning of May and leaving in November for warmer waters.

It’s not uncommon to see big piles of chopped up fish or squid on the beach. It’s a sure sign there’s bluefish feeding in the area. So, get out there and try your luck catching bluefish by casting in to the breaking schools of fish….you’ll be glad you did.